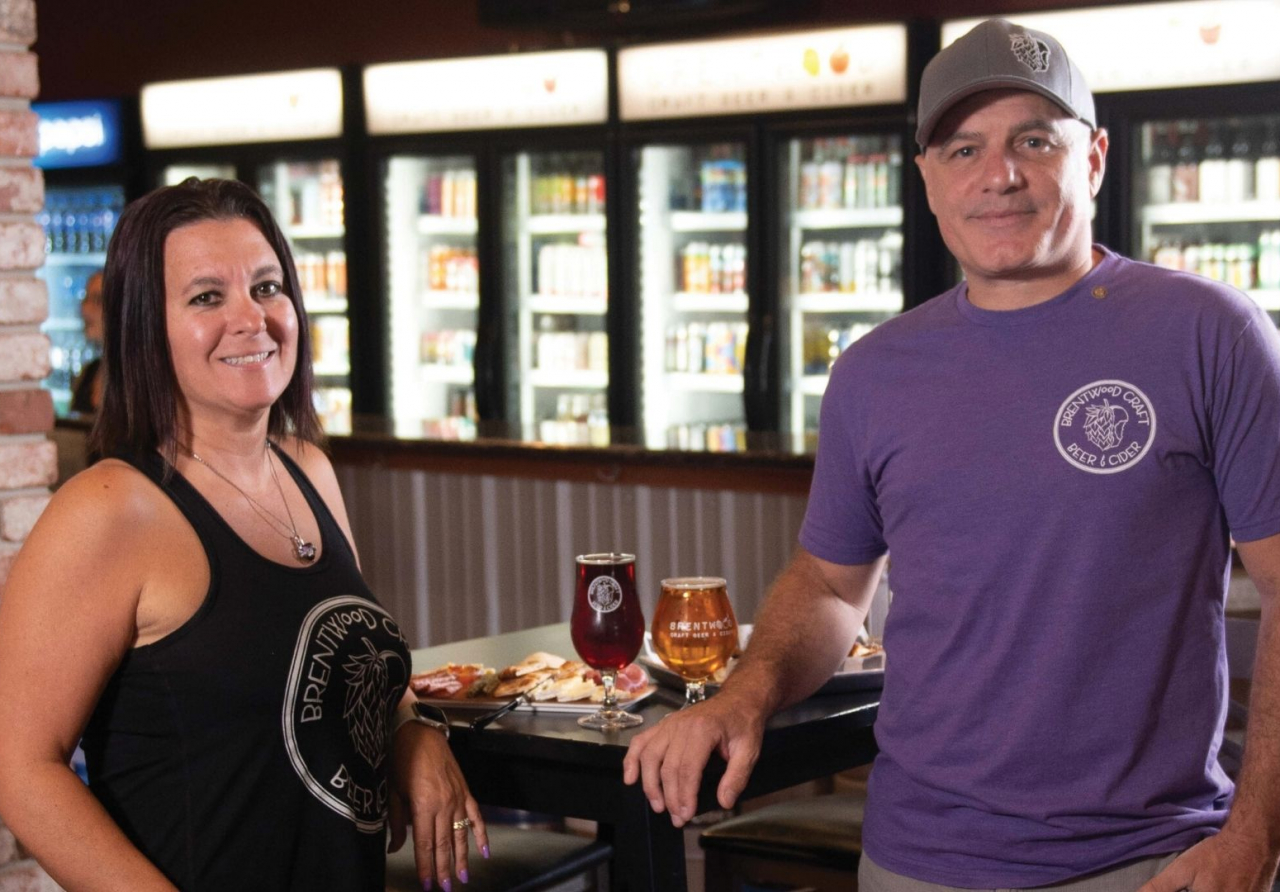 Brentwood Craft Beer and Cider, a tap room in downtown Brentwood, is bustling with crowds and laughter. But the picture was very different during the COVID-19 shutdown.

Shuttered doors, echoingly empty dining space, and closed bar taps left the future of the local hangout in jeopardy. Owners Joey and Suzanne Nardone explained, “We didn’t know if we were going to make it through that time.”

Operating as a to-go establishment, the Nardones set up a table at the door to take orders and sell cans from their, at-the-time, single cooler of chilled beer and cider. They also started offering glass growlers with lids (to-go cups for drafts), which were refillable.

Soon, people, masked-up and standing six feet apart, began to form lines down Oak Street, while waiting for the opportunity to support their favorite local business and its take-away service.

“We were overwhelmed by the support of our patrons,” Joey said. “Complete strangers came in the dozens to support us.” He recalled one person who stopped by and said, “I don’t even need beer right now; I just want to pick up a four-pack, so you are still here when this is all over.”

Joey continued, “We started out with only one cooler to store the to-go cans and were able to add three more. The support of the community meant the world to us. People expressed how much they loved our tap room and wanted it to survive. That was the greatest compliment we could ever get.”

He added, “And it wasn’t just our tap room; the community rallied behind so many local businesses during COVID-19 and saved them from closure. It’s truly incredible.” 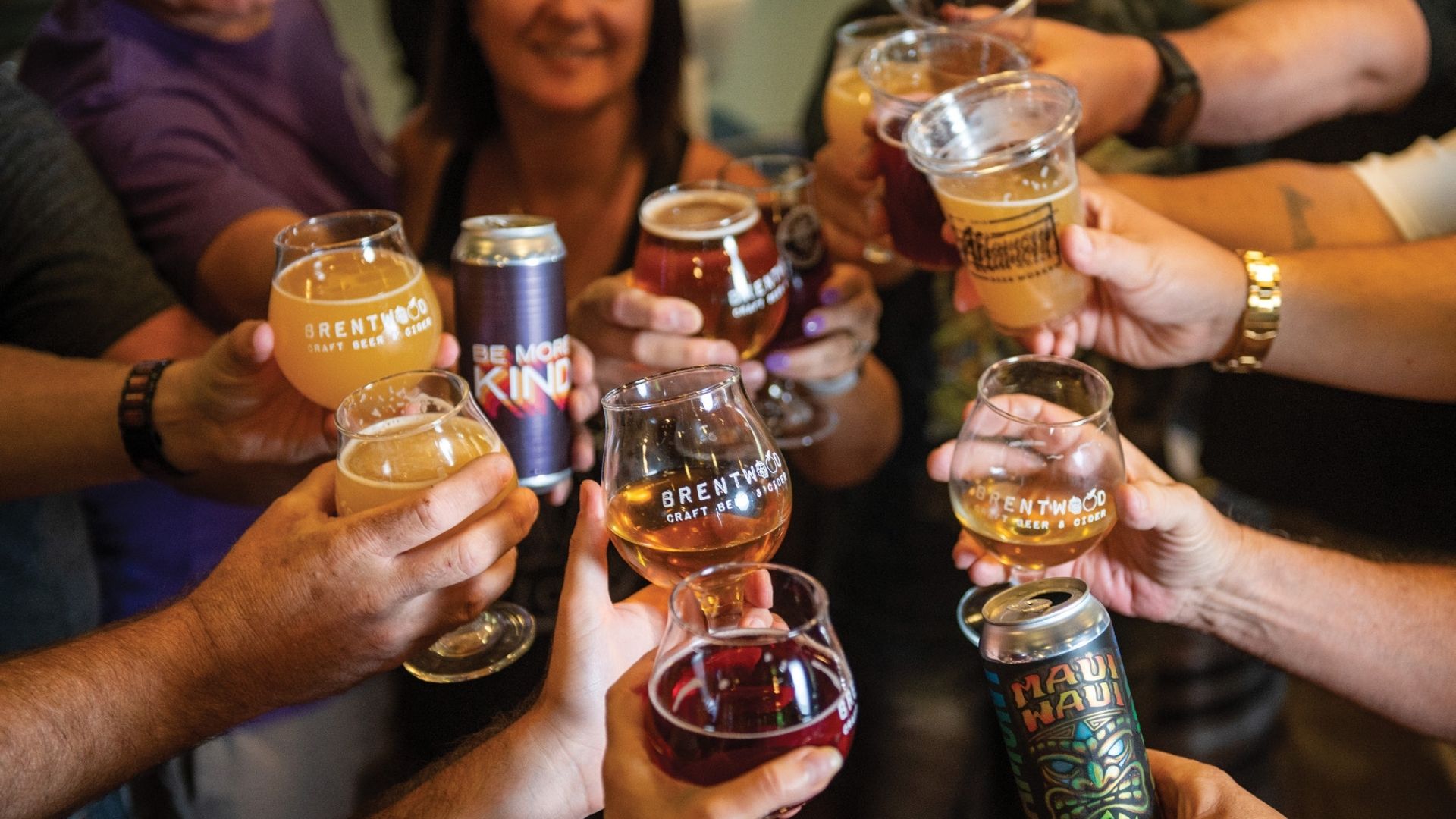 “DURING THE SHUTDOWN, THE NARDONES DID HOME DELIVERIES OF BEER, CIDER, AND THEIR FAMOUS PRETZELS.”

TIME TO GIVE BACK

With restrictions lifted, Brentwood Craft Beer and Cider has fully reopened and tables are once again filled with loyal customers. Joey shared, “This is their spot. We welcomed them in with the hospitality and the great drinks they deserved. Now, it’s our mission to say thank you, on a larger scale, to the communities of Brentwood, Disco Bay, and surrounding areas. It’s truly their support that kept us afloat through the pandemic, and it’s our honor and privilege to be able to give back through neighborhood fundraisers, events, and sponsorships.”

The Nardones, who have always had a passion for causes, have partnered with numerous local organizations and charities to sponsor events such as the Downtown Brentwood Coalition’s Cornhole Tournament.

On September 13, they served as a sponsor of the Delta Harvest Run, organized by Delta Realtors Community Service Foundation. And on September 15, they sponsored a S.H.A.R.E Community event, offering a menu item and two drinks to ticket holders. Proceeds went to fund the organization’s mission of sharing hope, abundance, resources, and encouragement with unhoused neighbors.

They’ll be at the Rotary Club of Brentwood’s Poker Tournament on October 22 at the Brentwood Community Center.

“All of these organizations are very important to us,” Joey said. “We want to highlight them as heroes in our community. We’d also love for everyone to come out to the next big fundraiser we are sponsoring–Pints for Polio.”

Pints for Polio, hosted by the Rotary Club of Brentwood, will replace the Brentwood Craft Beer Festival. The inaugural event will be held on Sunday, October 24 from 12 p.m. to 4 p.m. at Harvest Park Bowling Center. Tickets are $40 in advance (available through Eventbrite) or $50 at the door. Proceeds go toward the global effort to eradicate polio. A portion will also be given back to the Brentwood community through scholarships and local support. Pints for Polio will feature more than 30 breweries and cideries and live music. For more information, visit facebook.com/brentwoodcraftbeerfestival. 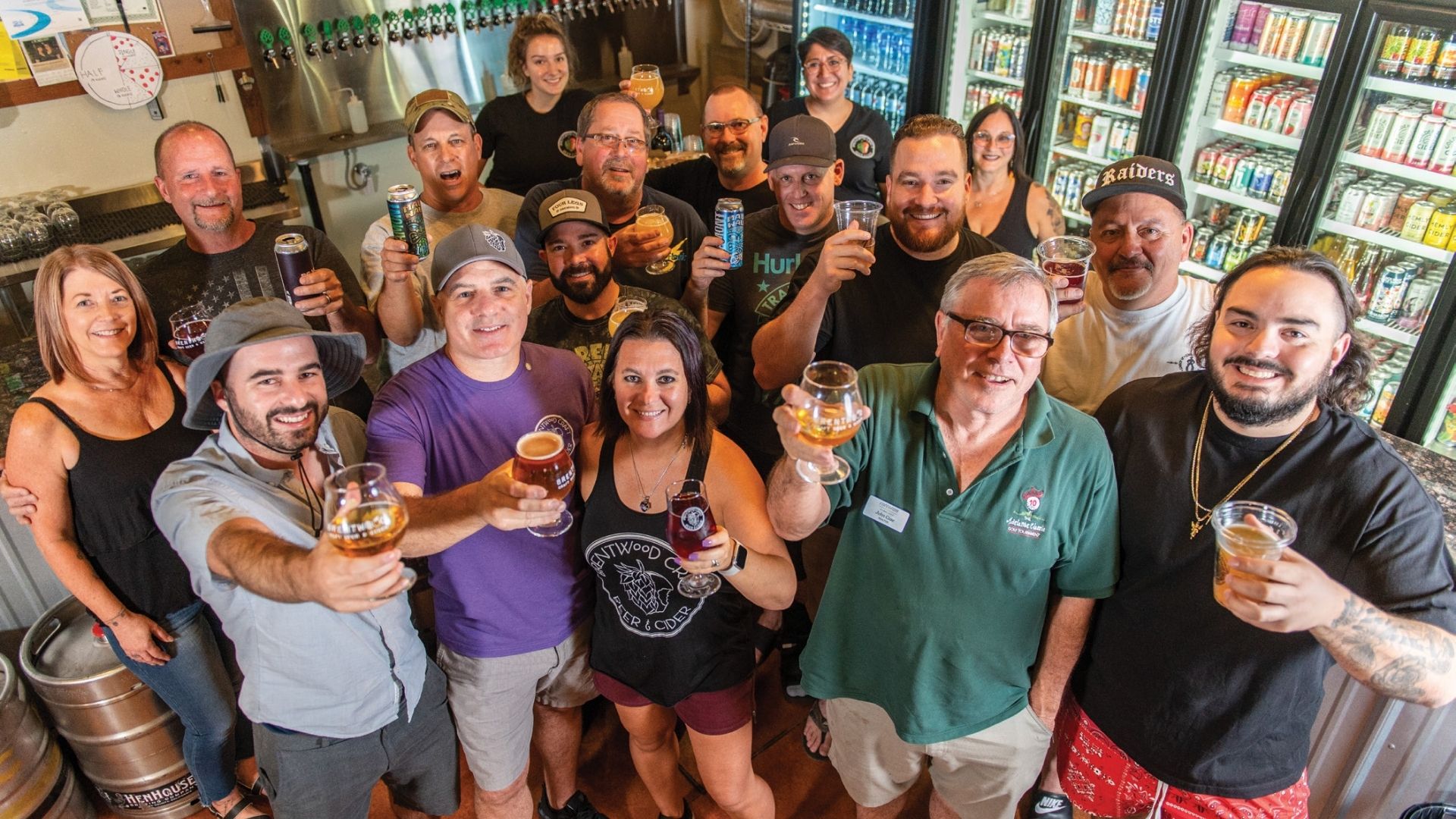 A BEER AND CIDER DESTINATION

“The former Brentwood Craft Beer Festival showcased our community as a destination for craft beer and cider,” Joey said. “We are proud to be part of a vibrant city that has now become a true destination for enthusiasts.”

Brentwood now has several tap rooms that patrons can visit, including The Mannheim Social Club, located at the old Brentwood Emporium; Imperiale Beer Project, the Brewery, located on First Street next to Zephyr Grill and Bar; as well as Four Legs Brewing on Elkins Way next to Sunset Park Athletic Complex. Local homebrewer, Ruff House Brewing, is also in the mix with many of their famous drafts available throughout the city.

“We all work together and collaborate,” Joey explained. “People would think it’s competition, but it’s the opposite. We support each other and help grow the businesses. Together, we’ve got Brentwood on the map for quality craft brews.” 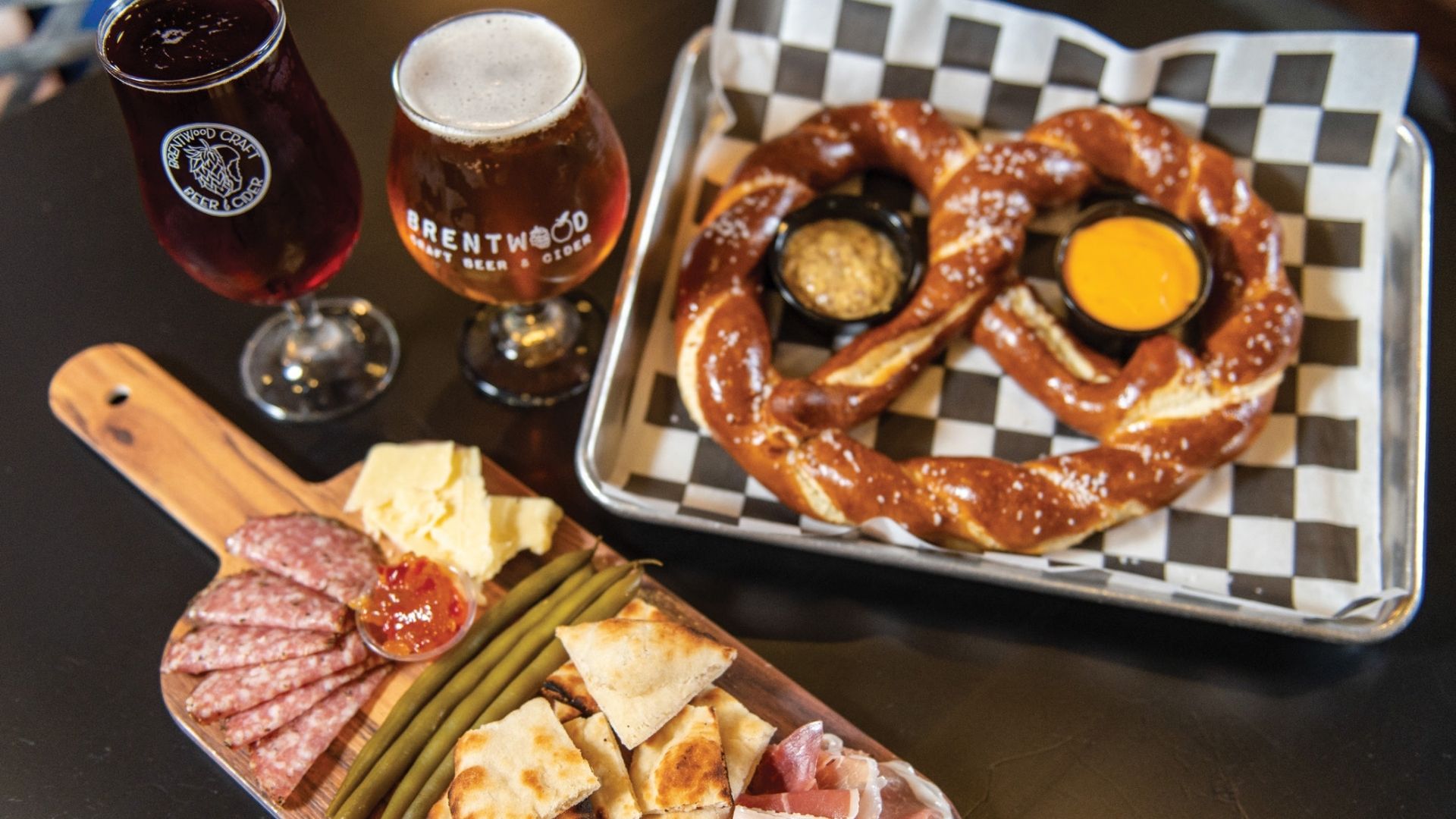 “My wife, Suzanne, and I love the culture of craft beer,” Joey said. “There is so much diversity and uniqueness in taste profiles. Craft beers are born through creativity, just as much as scientific variations in the brewing process. It’s an art.”

Joey and Suzanne carefully curate every beer and cider that sell at Brentwood Craft Beer and Cider. They have 28 rotating taps including seven ciders and one hard seltzer.

“It’s uncommon for tap rooms to offer this many draft ciders. We are known for our variety, and we put an emphasis on offering the best in the East Bay,” Joey explained. “Cider, cider, cider … it’s our big focus.”

The Nardones have a few requirements when they source beers and ciders. The first–it must be independent. He explained, “We only buy from independent brewers. We go to people, not corporations.”

They also prefer to sell local craft brews. Whenever possible, they travel to breweries within a two-hour radius of Brentwood. During these field research trips, they taste test new offerings and make careful selections on what they think their customers will enjoy. Many of these microbrews are so exclusive–and in limited production–that they must get on a waiting list to be a buyer. When they find one they like, they bring cases and kegs back to sell at their tap room.

Of course, there are the staples. They noted favorite breweries in the Monterey area: Dust Bowl, Alvarado Street, and Fieldwork, as well as Humble Sea in Santa Cruz and Moonraker in Auburn. Often, customers will also find Brentwood breweries on the menu: Imperiale Beer Project, the Brewery, and Four Legs Brewing.

Additionally, the Nardones focus heavily on customer feedback. “When someone comes in and tells us about a beer, saying it’s ‘the best they’ve ever had,’ we have to try it out,” Joey said. “We research and look into stocking it.”

They also use the app Untappd to see customer ratings and feedback. The interactive tool plays a large role in what they offer.

Joey, Suzanne, and the staff aim to understand as much as they can about each brew, explaining varying taste profiles and helping customers find their perfect sip, from blonde to stout.

With Oktoberfest in full swing, it’s an exciting time for Brentwood Craft Beer and Cider. They are offering many varieties of seasonal drafts and bottles, including a selection from Altamont Beer Works. Customers can check the current menu at untappd.com/v/brentwood-craft-beer-and-cider/8923357.

“WE ARE SO PROUD TO BE A PART OF THIS COMMUNITY AND HONORED THAT YOU RALLIED BEHIND OUR BUSINESS DURING THE TOUGH TIMES.”

The COVID-19 shutdown forever changed the Nardones business. Many of these adjustments have propelled the tap room to an even better place.

“We are incredibly thankful for the Downtown Brentwood Coalition,” Joey said. “They were able to get to have 11 patio awnings built for downtown businesses, allowing us to continue outdoor dining permanently.”

Working within whatever limitations they were given with COVID-19 orders, they never closed one day. During the shutdown, the Nardones did home deliveries of beer, cider, and their famous pretzels. They built ongoing relationships with those customers and even stronger ties to the community.

The growlers are still refillable today. The loyalty program (which offers point tracking for free food) is even stronger as well. The cooler expansion, made possible by take-away bottle service, now offers more than 1,000 bottles and cans.

Beer tasting and taster flights are once again available with seating available indoors and out.

Suzanne has even added items to the menu including a charcuterie board and pizza. But, the local favorites, pretzels with beer cheese and loaded nachos, will always remain.

Brentwood Craft Beer and Cider, which has been open since May 2019, is back to its “chill vibe” and fun atmosphere. The tables are full, the games are back on the TV screens, and the local customers have reclaimed their favorite seats in the house.

“Thank you, Brentwood,” Joey said. “We are so proud to be a part of this community and honored that you rallied behind our business during the tough times. You did it, not because of us, but because you wanted your local hangout to survive. It’s truly our privilege to continue making that possible for you, every single day.”

Brentwood Craft Beer and Cider, located at 234 Oak Street, is open seven days a week. For more information, find them on Yelp, Facebook, Instagram, and Google.