Miracle can often be a contentious word. Many people don’t believe in the existence of miracles. The word evokes existence of a being or force more powerful than man, who can create powerful change for the benefit of good. Sometimes such horrific events occur in our lives that we can see no good ever coming from them.

My beautiful wife, Gaby, passed away the day before Valentine’s Day in 2019 after a four-and-a-half-year battle with an extremely rare but lethal cancer.

Going to Mass after that was challenging for me because it hurt my heart to be there with our two young daughters without her. I could not stop from tearing up every week at Mass. I knew it was normal and part of the grieving process, but it was very hard to experience. It was also hard to see families there that were intact with both parents present. I felt stuck, like tires stuck in the mud, and could not get any traction to get our lives back on the road.

Then it happened; it was on a Sunday, after Mass. We were in the foyer of our church, and I was approached by Sister Barbara who directs our religious studies programs. She told me she knew I was a Public Health Nurse and knew of programs or benefits that might be helpful to a fellow parishioner who was going to be bringing her husband, Arnoldo, who had suffered an anoxic brain injury, home from the hospital after a three-year stay. My heart immediately went out to this person because my own mother had brought my father home from the hospital after his very debilitating stroke when I was in the military. I remembered how she would work all day and then come home to take over for the in-home care providers that she was able to hire and would then take care of him all night. I remembered how tired and exhausting it was for her. I returned home to help her out, and still it was too much for us. Eventually we had to find a skilled nursing facility for him where he stayed until his death. I told Sister Barbara that I would be happy to help, knowing it might make such a challenging undertaking a little easier. I asked her to give me the name of the parishioner and her contact information so I could call her and see what information or assistance she needed. As soon as Sister Barbara told me her name was Gabby, I felt God’s call in my heart and my eyes welled up. I told her, “How can I not help someone named Gabby?” 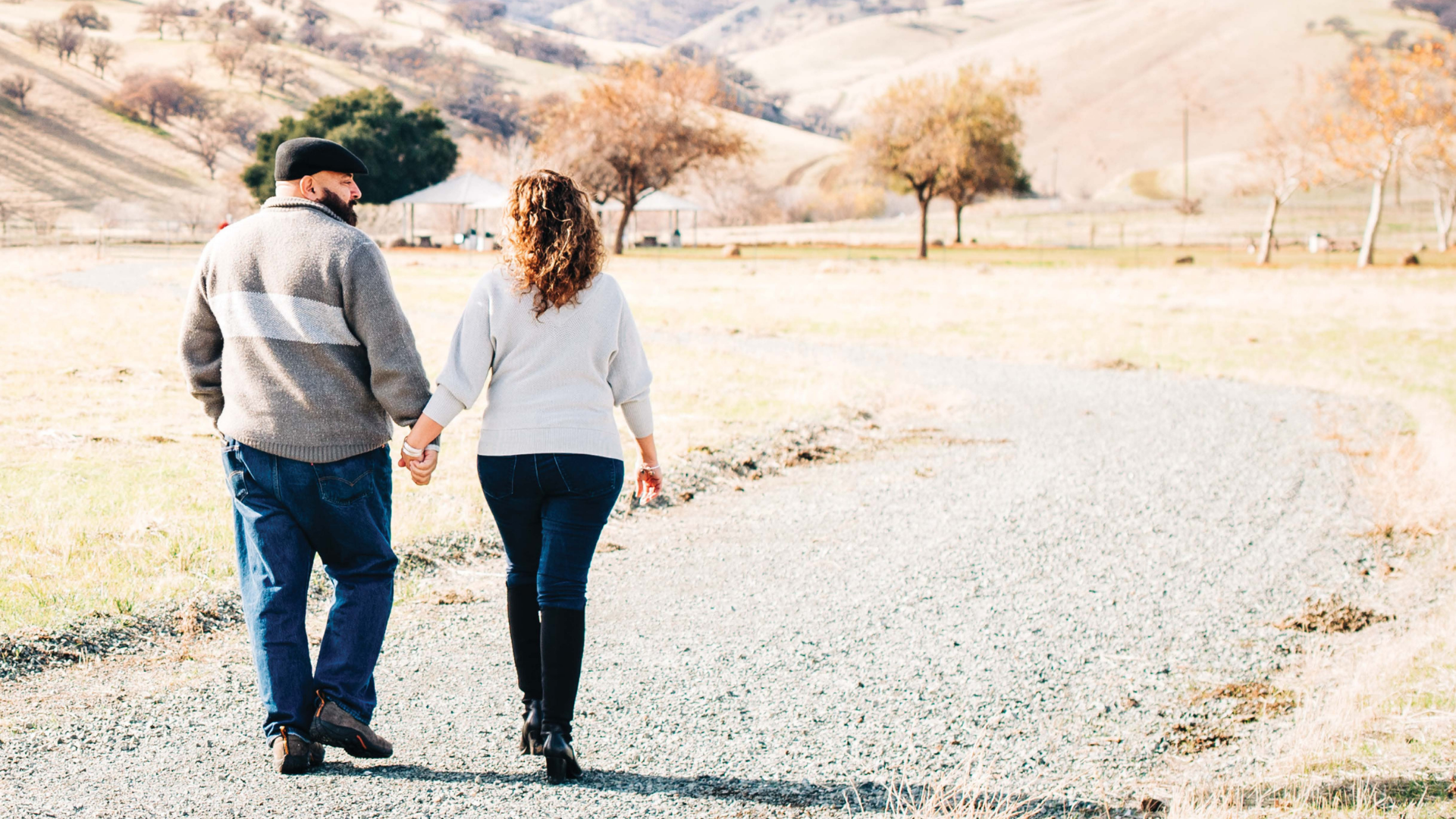 “Discovering and being able to love again is truly a divine gift.”

I called Gabby the next day and we set a time to meet and discuss what her plans were for bringing her husband home and her timeline. I met her sons and remembered how I had felt when my dad was suddenly diagnosed with colon cancer and admitted for emergency surgery. He survived that cancer but was never the same again. I knew then that I had to help this family as much as I possibly could. I gave Gabby all the programs, telephone numbers, and websites I was aware of and my contact information if she had any further questions. I would call every few weeks to follow up and see how things were going. I was never able to reach her and figured it was because she was so busy or stressed.

One night, five or six months later, I ran into an acquaintance downtown in Brentwood, and Gabby was with her. I asked how things were going at home and we chatted for a while until I left to go home. A few months later, I reached out to her again to see if I might be able to assist with anything. She was at the hospital because Arnoldo was having a procedure done; she had been there since early morning. I asked her if she had eaten lunch, and she said she hadn’t even eaten breakfast. I knew that, sometimes, taking care of the patient means taking care of the caregiver. I was about to go to lunch and offered to bring her a burrito from the local taqueria since the hospital was on my way home. She thanked me and I brought it by for her. We talked in the waiting room, and I saw how exhausted she looked. I was so impressed in her faith that he would improve and get better.

Unfortunately, he did not. Over the next few months and many more hospital visits, his condition worsened and he finally came home on hospice and passed away peacefully, surrounded by his wife, children, and family.

At some point during our conversations, I had become aware that Arnoldo served in the Marine Corps. I, too, had served in the Marine Corps. I knew that there were honors and entitlements that a Marine and his family can receive when he passes away. I informed Gabby of this and then contacted the Marine Corps Headquarters in Washington, D.C., and was able to order his Dress Blue uniform with the medals he earned so he could be buried in them. I also was able to contact the local Marine League detachment so he could have a rifle salute at his burial. I called the local Marine Reserve Unit in Concord and they provided two Marines, a Colonel, and a Sergeant, to come to the burial and present the flag that covered his casket to Gabby, and his medals, rifle badge, and Dress Blue belt buckle to his sons.

Gabby and I had become friends through all of this, and after Arnoldo passed away, we continued to share with each other and support each other through our grieving process as friends who have gone through the same experience of losing a spouse. My girls and her boys have been able to be there for each other as only they can, having experienced the loss of a parent. I have tried to be there for the boys and shared with them those values their father would have, and Gabby has done the same with my girls.

Time passed and we continued to be close friends and do family things together. One evening, she and I went to a movie and I inadvertently touched her wrist. I felt an all-encompassing surge of energy pass through me and suddenly I knew, I love this woman, and we are meant to be together. We started dating soon after that. The following spring, we were at the beach and I proposed marriage to her. She accepted, and I became the happiest man on earth.

“We both know that life can be too short, and we are blessed to have found love again after all we have been through.”

As soon as Sister Barbara told me her name was Gabby, I felt God’s call in my heart and my eyes welled up."
We both know that life can be too short, and we are blessed to have found love again after all we have been through. We also know the experience of blending families can be challenging. It is not always easy, but we have many factors working for us:

FAITH. We have faith that God has a plan for all of us and everything happens for a reason, even if we don’t know the reason for years, if ever.

TRUST. We trust in that faith and in each other, knowing that we have both been through what is arguably the worst experience a spouse, parent, and friend can ever go through, and that we will be there to support each other in that grieving process, which can so often be brutal and heart-wrenching.

LOVE. We have been blessed by God in knowing love. We understand that love, true love, can withstand the forces and stresses of everyday life. We love each other and are one. We love our children and each other’s children and have been given the mission to continue to raise and nurture them in love so that one day they, too, will be able to recognize and pass on that love.

PEACE. While any parent of a family of five children will probably say that peace is a challenge in the home, there is an internal peace of knowing that our families are becoming whole again and that our children are not, as they jokingly call themselves, “half-orphans.” That peace is in knowing that Gabby and I are fulfilling a role for each other and our children, of being a father and a mother.

COMMITMENT. Loving is a commitment, and it takes time, dedication, and sacrifice. There is security for every one of us in knowing that we are committed to each other.

COVID-19. Oddly enough, this pandemic and the ensuing quarantining and sheltering in place has allowed us to really concentrate on getting to know one another on a daily basis. We spend time with each other almost daily. We spend all the holidays together. On New Year’s Eve, we played charades together. I have been able to spend time with the boys and do those special things Arnoldo would have done with them, and Gabby has spent time with the girls doing those special things Gaby would have done with them.

There is no pain greater than that of losing a loved one. Discovering and being able to love again is truly a divine gift. God brought us together, of that I have no doubt. There are simply too many coincidences in our story for it to be anything else but God.
I have experienced my miracle.