My “On the Spot” Art

A Prominent Plein Air Artist Tells of His Life


I am an artist and have painted more pieces than I could count — thousands, for sure. I have created pieces using many artistic media, but my central focus has been using water colors to create them “plein air,” meaning outdoors, which permits me to capture a scene in its actual environment at the moment of creation.

I have been creating my outdoor paintings since 1973. My first attempt at plein air was under the direction of a talented watercolor instructor at Redwood City’s Cañada College. He would take us down to Redwood Creek where we would paint boats and scenery around the iconic Pete’s Harbor marina. In 1980, I joined a group called the Peninsula Outdoor Painters (POPs), which is an association of artists who share a passion for capturing on canvas the beauty of our Northern California region in all of its locations and moods. Every Tuesday a band of us would journey to some chosen outdoor venue where we would attempt to record the beauty of that particular place, at that precise moment in time.

Plein air painting is art in work clothes. The artist is under fire. We’re doing art as improv, live, and on-the-spot, so it is more like theater than television. Production time is limited, so I have to work efficiently. Watercolors dry quickly, so creating smooth transitions in the open air requires working fast or adding layers. In the summer a project takes several hours. In the winter, I might come back twice.

The fact is, plein air artists are often not working under the best of conditions. A gust of wind might blow the paper off our easel or blow the paint off our brush. (It happens on a monthly basis.) A rain squall might suddenly add more water than the watercolors can tolerate. People might be walking in front of us. A tour bus might park right in our view and offload a mass of tourists who are chattering, laughing, and walking around. They are taking snapshots of each other, the landscape, and sometimes you and your unfinished creation, plus doing a thousand other things to distract your attention from the moment and the view. 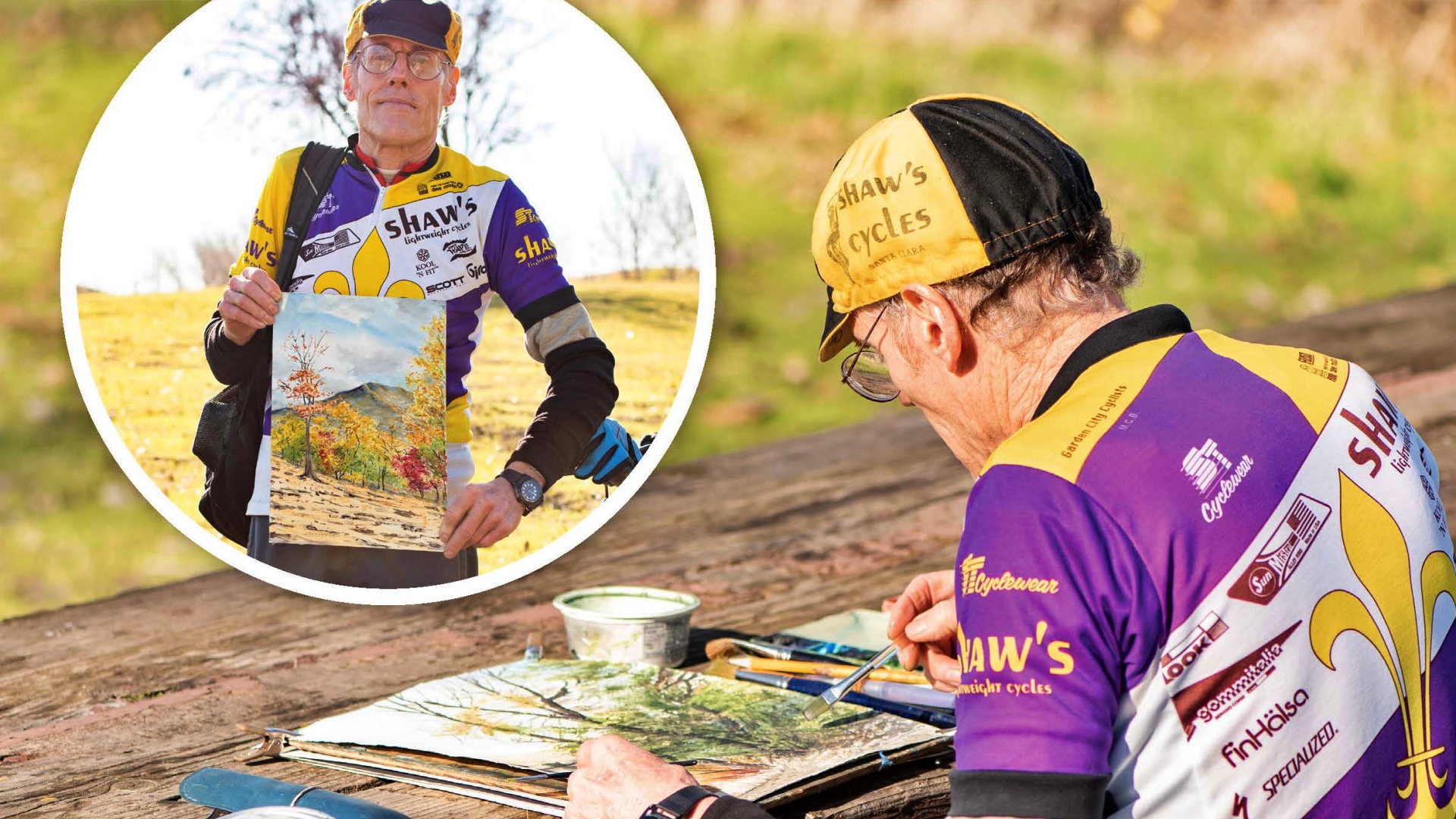 We work hard at our art and profit from reversing the “no pain, no gain” principle.

Nevertheless, completing a plein air piece is so satisfying that it more than makes up for whatever inconveniences and annoyances might arise during the process. We work hard at our art and profit from reversing the “no pain, no gain” principle. Over time the challenges toughen us. We become more flexible, able to alter our intentions, and to accommodate the unexpected when it shows up.

Beyond that, plein air has payoffs that are not easy to measure. Creating art outdoors affects the results substantially.

When I approach a site on foot or bike, I’m engaging with my other senses in the qualities of the place. I smell the distinct aroma of local vegetation, listen to the sound of the wind and bird cries, and feel the texture of the soil. As a result, I am able to invest in the painting qualities that derive from the multiple sensory impressions that I experience during the act of creation.

A plein air painting is 80 percent finished by the time I get it to the studio.

I may do a little tweaking, but it is pretty much done. I will study it, walk by it, look at it repeatedly, and devise a strategy for the next step.

My passion for art was apparently passed down in my DNA. My paternal grandmother was an artist. She passed the year before I was born but left behind evidence of her artistic bent in a half-dozen paintings that adorned the walls of our house during my formative years. Grandma was self-taught and her pictures were primitive uncrafted landscapes, sometimes populated by gnomes, fairies, and other mythical creatures. They weren’t very good paintings. Her daughter-in-law, my mother, who was never one to hang on to possessions that didn’t bring her pleasure, probably put them into some dumpster long ago. The single remaining example of Grandma’s art is an oil painting of a fall landscape that is hanging on a wall in my sister Lisa’s home.

Both of my parents were college graduates. Mom was a teacher and Dad was an engineer who was involved in some of the pioneering analog computer products that were developed in the ’50s. Unfortunately, I inherited none of my mom’s gifts with language nor my father’s abilities at math and science. Mom’s ongoing private tutoring sessions helped me struggle through my 12 years in the public school system.

A bigger problem with school than my mental slowness was that, during my earlier years, I would be sitting in the back row of the room sketching a picture of some hillside, forest, or mountain range while ignoring the teacher’s explanation on how to carry over a number in a long division problem or identify the direct object in a sentence. My distraction became so bad that I was expelled from the sixth grade. At the same time my father, who was president of Applied Dynamics, had become weary of the manner in which several University of Michigan professors who were members of the company’s board kept interfering in how my father carried out his duties.

It was fortunate that Dad had become upset with his job the same time I had become sick of school, so it was a relief for both of us when he moved us to California. It was the fall of 1965, and I was 12 years old. We moved to Menlo Park, and Dad set up his office in Palo Alto. It was a good move for him because companies like Lockheed and Lawrence Livermore Labs, were buying Applied Dynamics products, especially from the independent manufacturers rep business my father had set up.

While attending eighth grade at Menlo Park’s La Entrada Middle School, the progress of my education took an upward turn. For one thing, I had a better math teacher. We all called him “Happy Jack,” because he was always in a cheerful mood. I got the impression he was also a chain-smoker, because he always smelled like a dirty ash tray. Most math teachers seem to have a knack for making math boring, but Happy Jack helped me improve my skills until I was finally able to work out math problems at a nearly mediocre level.

My school situation at La Entrada greatly improved when I finally encountered a teacher who understood my passion for art. She assigned projects that would permit me to use my talents to promote my learning. For example, she assigned me to create an illustrated Art History Report. I did eight pages summarizing the life and work of eight famous artists and included a little colored pencil reproduction of one of the particular artist’s most famous works. For example, on a page about Monet, I reproduced his famous Pond with Water Lilies painting.

My final artistic project in that school was helping to convert an area in the school’s multi-use room into a theater stage. I applied gallons of poster paint to enormous rolls of construction paper to create colorful backgrounds. At the end of each scene, the background, perhaps an outdoor picnic area by a lake, would be rolled up and another rolled down for the next scene, perhaps showing a living room with a fireplace in the corner. It was an enormous undertaking for a single individual, and I was excused from classes in order to get the job done. In the evenings, Mom helped me make up the work that I had missed that day.

After middle school, I enrolled in Woodside High, which was one of the top public high schools on the Peninsula and perhaps in the state. I took some art classes. However, in 1968, at age 15, I painted my first watercolor from memory. It was a landscape focused on my parent’s house, framed by nearby fences and the more distant Santa Cruz mountains. Painting that picture became a pivotal point in my emerging career as an artist. I did another watercolor of our barn. Watercolors are difficult; they require a subtle and deft touch beyond that required by the more solid oil and acrylic media, but I was becoming hooked.

In high school I continued doing watercolor landscapes from photographs, but was also continually working with whatever media was at hand. I was prolific because, unless called away by a pressing biological or social demand, I was always sitting or standing in front of a blank sheet with a brush or pencil in my hand. I took a series of courses in drafting and began drawing up house plans on the school’s drafting tables. Following high school I earned an AA in Art from Redwood City’s Cañada College, followed in 1977 with a Painting & Drawing degree from San Jose State. I then returned to Cañada and got a certificate through their Adult Education “Kitchen and Bath Design” program.

During that time I was living near Santa Clara’s Great America Amusement Park and rode my bicycle the 50-mile round trip to Cañada College during the year-and-a-half I spent in the program. I have always preferred riding a bike to driving a car. Before becoming a teenager, I discovered my bicycle to be more convenient than public transportation or attempting to bum a ride from my friends. Even after I got my license, my bicycle continued to be my preferred means of transportation. I became a member of the Western Wheelers bicycle club in my early-30s and joined fellow members in century rides, competitions, and overnight camping excursions.

Most of my plein air projects begin with me packing easel, brushes, and paper into a large pack, strapping it to my back, mounting my bicycle, and heading to some outdoor site where I might paint anything from a mountain range to a vernal pool. We all know the principle that what you get out of anything depends upon what you put into it, so it should come as no surprise that my plein air art is providing me with endless satisfaction. It is like a great drug; it makes me high!

My art is on display at a number of galleries. I’ve shown with the prominent local plein air artist, Nancy Roberts. Every year I put a show on at the Big Break nature center. Next December, Brian Carleton and I will be featured on the art walls at the Brentwood Community Center. Plan to check it out.