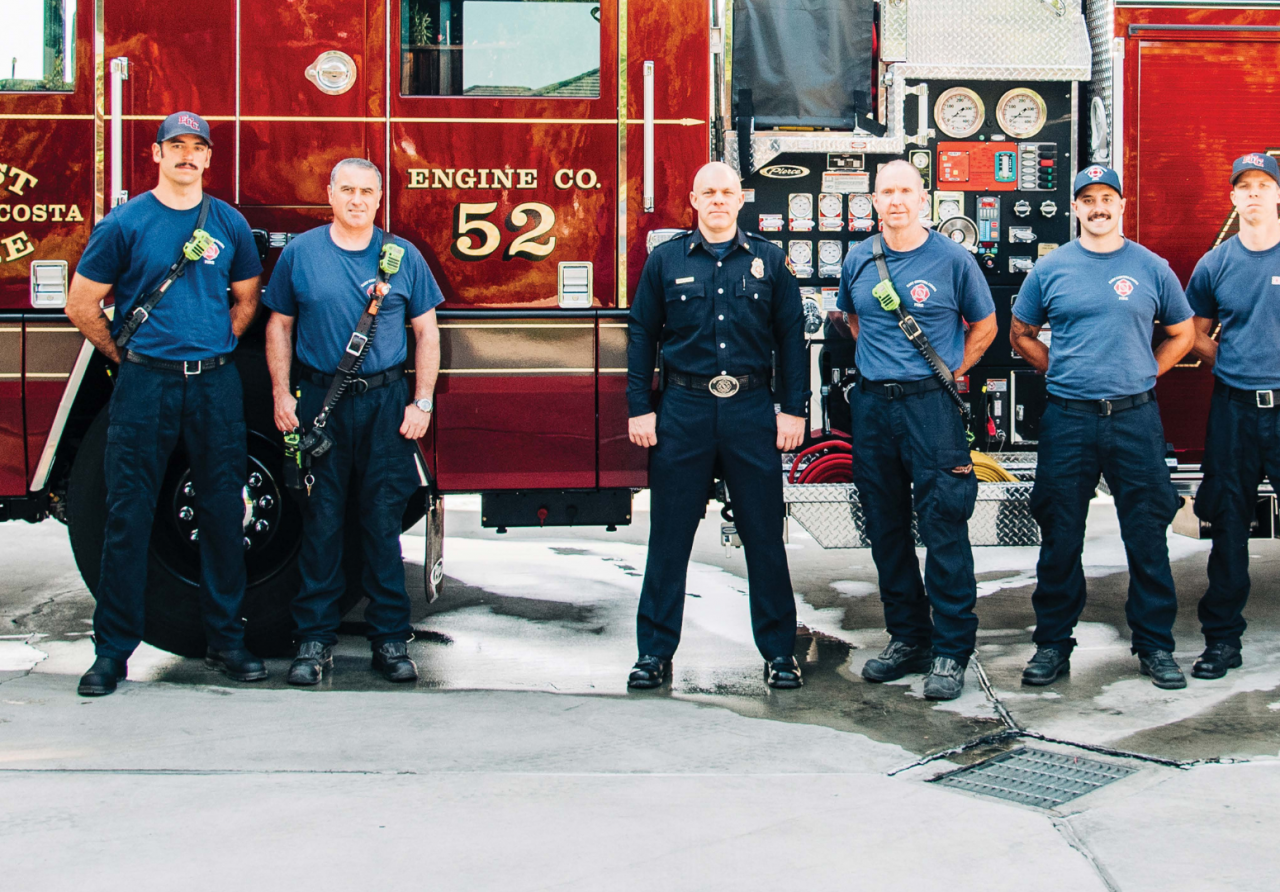 Coming To The Rescue of ECCFPD

Every community has its benefits versus challenges. Here in far East Contra Costa County, our California sun-drenched landscape is tucked perfectly under the Diablo and Vasco hills, nestled against the Delta, and ideally situated with wind-swept flatlands sometimes blanketed in fog–perfect for agriculture. This area has historically been considered a farming community, with roots stretching back long before all the housing developments that now dot once rural streets. The growing pains have been felt significantly on our roadways, in our schools, and are now hurting our safety infrastructure. This suburban lifestyle uniquely existing as both a farming community and boating oasis enjoyed by our over 128,000 residents spanning Brentwood, Oakley, Discovery Bay, Byron, Knightsen, Bethel Island and Marsh Creek, and Morgan Territory is protected by a safety net that has reached max capacity. In a time of fire seasons that endure far longer than any other in history, the risk of danger and loss is at a critical peak. Taking up the fight to keep us safe, are the men and women who respond when the bells begin to sound. Under the leadership of Fire Chief Brian Helmick, the three stations that currently make up our East Contra Costa Fire Protection District (ECCFPD) are engaged in a battle for the preservation of safety in the district they serve–the district they have chosen to report to, sworn to protect, and lay down their life for.

“In the 90s, I graduated Miramonte High and was a reserve, volunteer firefighter for the Moraga Fire District. Theirs was a well-funded organization. I was in line to be hired there but they told me I needed more experience, and they pointed toward East Contra Costa as a great place to find it. My wife and I moved to Oakley and fell in love with the area. That was in 1999, a time when the fire department was still a volunteer-based, part-time staffed entity.” Helmick shares, “It wasn’t until 2002 that I became a full-fledged firefighter, but I had already recognized some concerning weaknesses in the district. It was underfunded with a lack of structure, while houses were popping up everywhere and the population boomed. I felt a call to seize this opportunity to help build the fire protection district infrastructure into one that would support my growing family and community.” 21 years later, Helmick resides in Brentwood and shares children Brookelyn, Kollyns, and Addelyn with his wife Kristen who works as a local middle school teacher. Their workload of supporting our community as civil servants is made lighter by the time they spend serving at Golden Hills, dedicating the greater part of their downtime to faith, family, and friends.

Says Helmick, “We’ve got to stop the bleeding.

After serving as Battalion Chief for over a decade, Helmick became Fire Chief in 2017. Helmick, the firefighters, and administration that make up the ECCFPD have been heralded for their efforts to support this area, despite the lack of funding or representation that has plagued the district since the 80s. “Brentwood was at one time the largest growing community in the entire nation, next to Las Vegas! Unfortunately, we were not putting measures in place to plan for that kind of expansion. Assessments and taxes pay for the fire district. The revenue allocated to us had been set at a level suitable for the rural, smaller population we had in the 80s and never changed. We only get an average of seven cents of every dollar of property tax. There have been measures in the past that would have placed proper assessments on homebuilders aiding the growth of the fire district, they have always been voted down by residents. We cover nearly 249 square miles, responding to over 7,700 calls per year, and standing-at-the-ready for over 128,000 residents. Our current three stations, with three staffed firefighters at each station, does not adequately cover a population this size.”
In 2019, we began to build a strategic plan to help right the errors of the past. We have got to address growth and financially supporting that growth, in order to provide adequate protection.”

The cold hard truth is that every year fire agencies proclaim, “This is going to be the worst fire season ever.” The past three years have been banner fire seasons with 2020 poised to prove more loss than any year before. The blood red sun and constant smokey haze hanging over us this past summer have seared the effects of wildfire devastation into our collective memories. “We have more vegetation and fuels still recovering from drought years. Fire seasons are running hotter and longer than ever, this season is predicted to run until December. We are part of a state mutual aid system. It’s a balanced equitable system meant to share resources with neighboring agencies. We lean upon it, almost abuse it. Resources are leant to us regularly that we cannot reciprocate. It was made most evident during the Deer Zone fire which swept through Marsh Creek and Morgan Territory in August. We relied heavily on help we called in from outside areas who battled to contain our region. We’ve become the face of the neediest agency, it’s a real problem.”

“We are holding on for better days when we can rebuild to a model that our citizens expect and deserve,” shares Helmick.

“We are on the edge of doing the impossible and undoing decades of wrong, ill management of our most needed resources to ensure safety.”

A far scarier result of lack of funding is the slow response time, it’s double the national norm. Helmick finds this truth defeating for his staff and further acknowledges that nearly 25 percent of the time, they don’t even make it to the call before it’s resolved by an outside agency. “We are trying to hold the line. No one wants to work in an underserved organization. We are set up to fail; in fact, during many calls we respond to, we encounter criticism by our fellow neighbors. They yell, ‘What took so long? Why is there only one engine here?’ The answer is, this is all we can offer and the best we can do given our current budget. We are holding on for better days when we can rebuild to a model that our citizens expect and deserve,” shares Helmick.

Adding to the pressures being placed on the backs of the current team of nine firefighters dedicated to this area and their administration staff, is the fatigue brought on by a fight that isn’t physical. Says Helmick, “Emergency responders are a different breed. We manage stress from calls, but this deep seeded guilt that arises when you can’t get to a call fast enough or at all, then once you do arrive maybe not having the proper tools to combat a situation it feels like failure. My team is faced with that feeling day in and day out. There’s a feeling of hopelessness that creeps in. For every firefighter injured in the line of duty, there are four deaths from suicide. And then there’s the issue with workers’ compensation, these men and women are true athletes, yet at one point our team had become so physically and mentally battered that we were operating with 20 percent out of commission. I equate this degradation of performance to if you were wearing a backpack and someone were to continue to drop rocks into it, at some point you can’t stand up. It will bring you to your knees.”

Helmick leads the fight to correct the course of the fire district’s future with a zeal that is often misinterpreted as harsh. His passion and ownership of his responsibilities to his team and our community are paramount in his mind 24/7 and he makes it known. He sees serving as Fire Chief as a privilege, one he does not take lightly. After many talks at the state level and with local advocacy efforts, Helmick and the fire district are optimistic that there will be initiatives passing that will potentially heal the hurts experienced by the district. “When I became Fire Chief, people asked me, ‘Do you know what you are signing up for? You are raising your hand to be the captain of the Titanic.’ I walked into this challenge knowing I could right the ship. I knew I could build the right team of firefighters, union, board, administration, legal counsel, and agency partners who collaboratively would rise to be part of a success story for our area. We are on the edge of doing the impossible and undoing decades of wrong, ill management of our most needed resources to ensure safety. I believe in our members and have faith that our community will come together to support them. Lastly, I want to say that our team is greater than me, and it’s for them that I continue to fight and leave no stone unturned when trying to make their job one that they can do safely and proudly.”