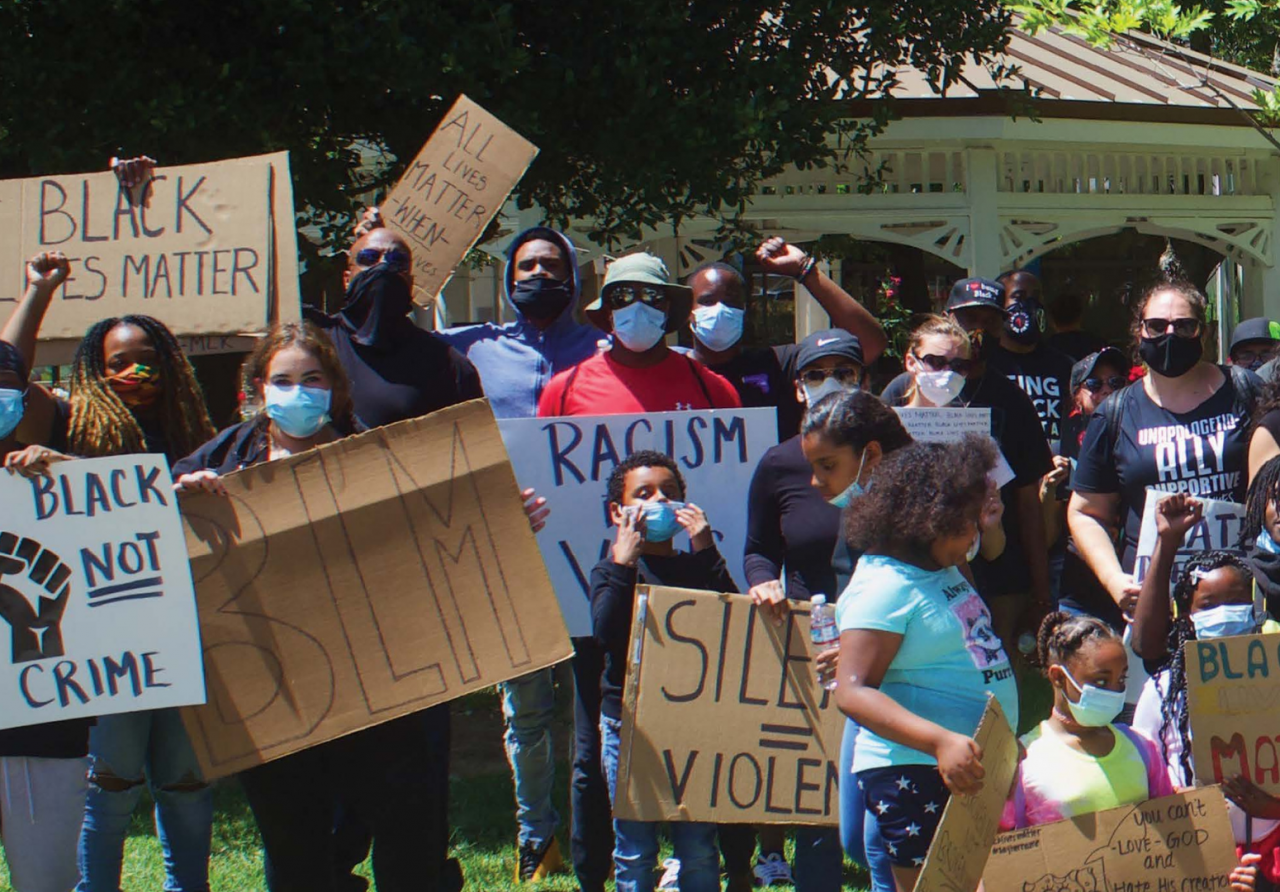 amidst all the agony over the recent death of George Floyd and with all the reoccurring pain the brutality of that magnitude brings to the surface, my family and I sat on the couch to watch a movie.

We have watched many movies together during the shelter-in-place order, but this particular movie was about to invoke something deep inside. The name of the movie was “Just Mercy,” and as I sat and watched that movie with my family, I could not control the flood of emotions that came over me. The movie is based on factual events and is the story of Walter “Johnny D.” McMillian, who in 1987 was arrested for murder, even though all the evidence indicated he was innocent. Racial biases and corruption led to him serving six years on Alabama’s death row because of perjured testimony and evidence withheld from his lawyers. He was later released but suffered so much loss. I broke down watching his story and had to hit pause. Fortunately for me, I have a father who was ready to share some pivotal and insightful viewpoints with me at just the right moment regarding racism and bias in America. 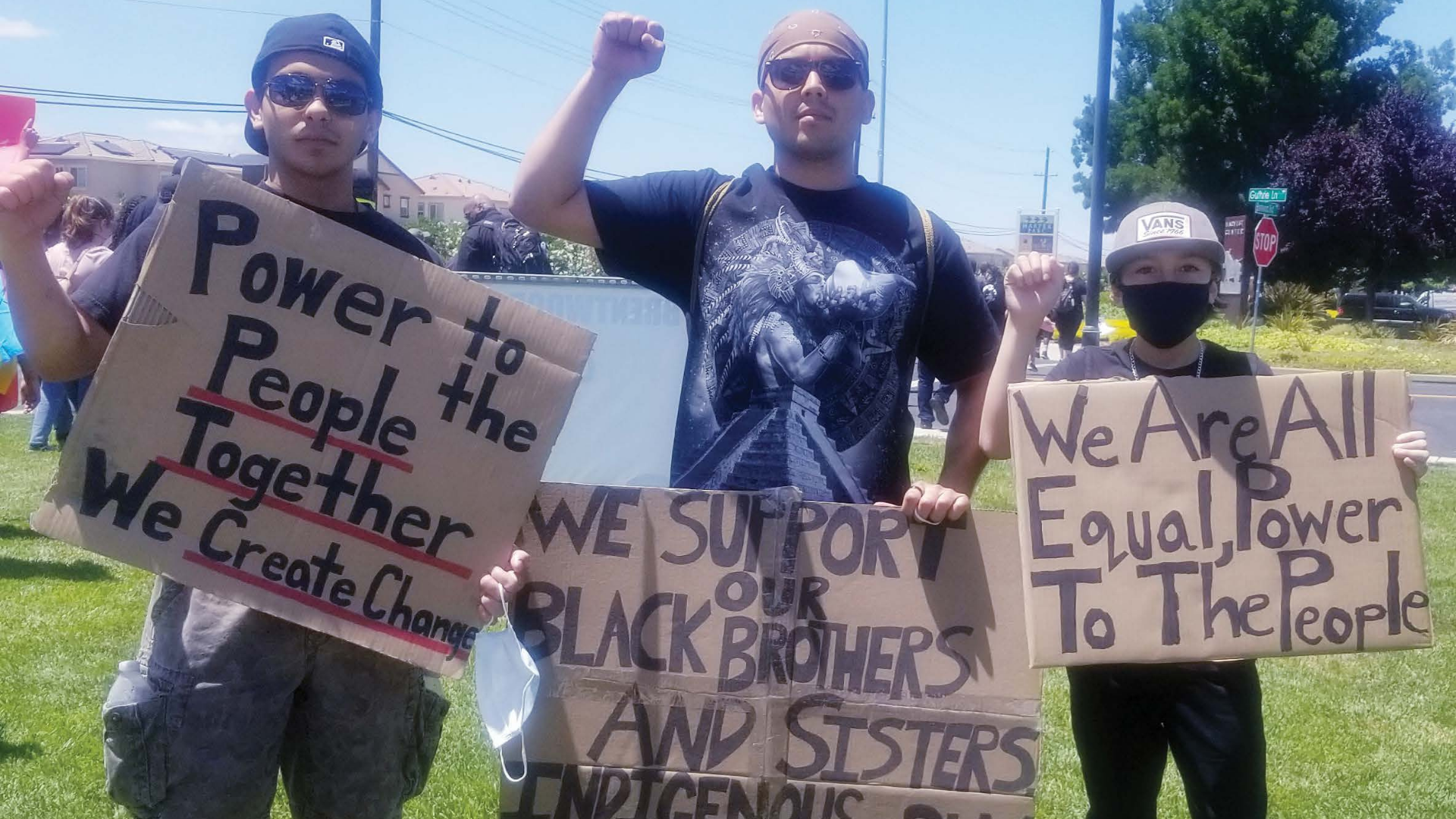 “I am a student at Heritage High School, and I was excited to share the event with my friends in anticipation of them joining me to incite change.”

My father gave me numerous examples of people throughout our history who have stepped up and made change happen. He looked at me and said, “Ayanna, you can be that change maker. Your generation can bring about a new way of thinking, you just have to be willing to do something about it.” Traumatized by the movie I just took in, my family decided I could use some fresh air, so we went for a walk throughout our neighborhood. You know how you can sometimes just feel tension in the air? That day it surrounded us; we all felt it. I decided that this community needed the kind of demonstration that was happening all over the United States as a result of the recent death of another black man in custody. It was time to rise up and protest for change. It was time to bring some awareness to the hostile issues that were once again gripping black people– possibly one day my own family.

It happened so fast from there. We were at the Brentwood Farmers’ Market on a Saturday morning and were excited and enthralled to see a Black Lives Matter booth. When we approached, a young Caucasian girl stood up to speak with us and we were pleasantly surprised by her eloquence at explaining why she felt so impassioned to be there. She gave me a social media link to the Bay Area Protest page. My older sister Tahte’Ana and I decided to organize a march going from City Hall to the Brentwood Police Department and posted it on that page. Tahte’Ana made a flyer for the event and we shared it throughout the community by posting the flyers and hitting many social media pages. I am a student at Heritage High School, and I was excited to share the event with my friends in anticipation of them joining me to incite change. I learned that most of their parents were not willing to let their children attend, whether it be because of the COVID-19 threat or otherwise, I am not sure. Many friends did communicate their support from afar and let me know they stood with me in spirit.

The day of the march we counted over 100 people amassed to chant for unity, end division, and stand for change. My whole family, including my sister Tahte’Ana, brother Anyanwa, parents Stephanie and Anthony, and our brother-in-spirit, Anthony Nelson Jr., stood together as a united front to be the method of communication needed at this time.

is the cause it is today can hear our pleas, so others can share their stories of the loss and bias that have plagued generations

Our purpose at that moment was to give a voice to everyone so those that do not know why Black Lives Matter is the cause it is today can hear our pleas, so others can share their stories of the loss and bias that have plagued generations, to illuminate the matters at hand and educate the masses. Drivers passing by honked, raised their hands up for us, many came out of their homes and waved. One lady even ran out of her home with bottles of water and passed them out telling us how happy she was to see this kind of protest happening. It was peaceful and enlightening. One of the speeches shared was from a 75-year-old man who is part of the NAACP and testified that he had been dealing with this as a black man for his entire life. He pleaded for a drastic change to take place. The most emotional point came as we all took a knee and had 8 minutes and 46 seconds of silence in reflection of the death of George Floyd. That’s when the tears flowed. So many ethnic communities were represented at the march, Brentwood really showed up to help foster humanity into a new era of harmony.

My dad says, “We evolve and settle into who we want to be in our hearts at a very early age. It’s hard to change a person’s heart or instill a genuine care for other human beings. We just need a chance to come to the table and have a conversation. Let people hear your experience and struggle, gain introspection and understanding, and not argue it but value it. Insensitivity plays a major role in the Black Lives Matter movement.” While we were walking along the path of the march, a person dining outside shouted, “All lives matter.” Of course we understand that notion, but when you look at the human race as a whole entity, do you not consider the various elements that make up that whole. What if you had a broken arm– would you think that’s ok because it’s the body that matters? You would attend to that broken arm. What if a house in your neighborhood was on fire? Would you think that’s ok because the rest of the street is doing just fine? Would you say, “All houses matter?” You would help fight that fire. If you care about the human race, then you need to take action and help heal any part of it that is suffering. Black America has been persecuted, profiled, and victimized by social injustice for far too long. It’s been an issue not addressed enough. My hope is for diversity training for our future law enforcement officers as well as schools starting at a young age to promote a society that views one another equally. Those children will grow to be leaders one day. With the proper background and education, they can become fair leaders.

Whenever he ventured outside his hometown of Oakland, my father experienced many instances of being pulled over and questioned by police, being followed into stores, and discomfort on so many different levels whether passive or aggressive. My sister and I have felt the twinges of discomfort in our own school experiences. I attended Ronn Nunn Elementary and at the age of only nine was asked to play the role of a slave in one of their on-stage assembly productions. I didn’t realize the magnitude of being chosen to sing the Slavery Chain song instead of the Star-Spangled Banner. But my mother reacted immediately when she found out. She helped me to understand that asking me to play the part of a slave and sing that particular song was wrong on many levels. I was faced head on with a questionable situation that both confused me and left me torn inside. My mother went to the school to express her concerns, to which she was told, “We’ve done this play like this for 20 years.” That’s my first example of ethnic insensitivity in my community. Says Tahte’Ana, “I graduated from a prominent university and while I was there, my best friend and I had a falling out. It happens sometimes, we all lose friends.

This friend happened to share a dorm room with me. We went about living together for a few weeks without speaking. Her mother went to the university to order me removed from the room claiming she feared for her daughter’s safety. Even as I had not done or said anything to be perceived as a threat, to my horror I was asked by my school to vacate my dorm room.”

Will Smith made a compelling statement recently, he said, “Racism is not getting worse, it’s getting filmed.” I want to help educate this community. I want to help the black community thrive. I want to be on the right side of history and one who didn’t sit silent but tried to bring change. Some think that if George Floyd’s murder hadn’t been filmed, none of this would have happened. Maybe it’s just time for an awakening. These protests and the cries of people like me and my family or neighbors living beside you, maybe they are just the wake up call we need to finally realize we are all one and we need to protect and take care of each other, no matter the color of our skin.